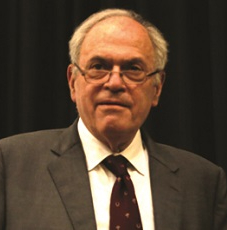 Professor Goldstein is a distinguished American journalism educator, education administrator and author. For 15 years, he served as dean of the journalism schools at Columbia and at Berkeley—the only universities in the United States where journalism is taught exclusively at the graduate level. Born in Buffalo, New York, he is a graduate of Yale University, where he majored in English, and the Columbia University Law School as well as its Graduate School of Journalism. Early in his career, while still in law school, he edited a new magazine called Juris Doctor. He then worked for Newsday (on Long Island), the Wall Street Journal (in New York City), the Associated Press (in New York City) and the New York Times (in New York City), where he covered legal issues for six years. While at the New York Times, he began teaching part-time at the graduate program at New York University. Starting in 1980, he served as principal Press Secretary to New York City Mayor Edward I. Koch for two years. He then embarked on a career as a freelance writer, where he wrote for dozens of magazines, and he began writing books, including The News at Any Cost. While writing analytical books about press performance, he pursued a parallel career in academia. Over the years, Professor Goldstein had the honor of holding five “named” chairs—at the University of Florida at Gainesville (1983-84), the Kennedy School of Government at Harvard University (1994), the Graduate School of Journalism at Columbia (July 2000-June 2002), Stanford University (Fall 2002), and Arizona State University (2003 and 2004). Professor Goldstein joined the faculty of the University of California at Berkeley in 1984 and served as dean of its journalism school from 1988 and 1996 and again from 2011-2012.) For eleven-and-a-half years, from 2005 to 2016, he served as director of Berkeley’s undergraduate program in media studies, which now enrolls about 500 students. From 2014-2016, he chaired the Admissions Committee for the entire University of California at Berkeley. Professor Goldstein took a leave from Berkeley in 1997 to serve as Dean of his alma mater, the Columbia University Graduate School of Journalism. While dean, he supervised the Columbia Journalism Review, the leading journal about press issues in the United States, and served as a member of the board of the Pulitzer Prize, the premier journalism award in the United States. Before returning to Berkeley, Professor Goldstein taught at Stanford and at Arizona State University. Professor Goldstein’s last book, Journalism and Truth, was published in 2007. He is now completing a book about the historical links between advertising and news. In the past 20 years, Professor Goldstein has worked as an expert witness in more than 25 legal cases involving press issues. He has consulted with many non-profit and for-profit organizations on press practices, including the Ford Foundation, McKinsey, and most recently, Twitter. He also spent a dozen years as a consultant on ethical issues to the top editors of Bloomberg, a global financial data company.