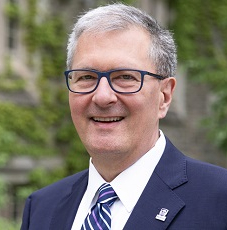 Professor Alan Shepard is the 11th President & Vice-Chancellor of Western University. He also served as President of Concordia University in Montrealand Provost and Vice-President (Academic) of Ryerson University in Toronto.

Elected to Phi Beta Kappa as an undergraduate, he earned a PhD in English from the University of Virginia. He is author or editor of three books and many articles focused on the culture of early modern England, early modern literature and science, modern theatre, the future of innovation and the future of universities.

He has served as a volunteer Universities Canada and the Montreal Chamber of Commerce. Currently, Alan serves as a Vice-Chair on the Executive Committee of the U15 Group of Canadian Research Universities, and also as a board member for Universities Canada, the London Economic Development Corporation, and the Stratford Festival of Canada.