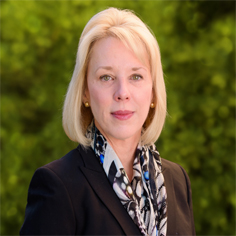 Dr. Lindquist became Senior Vice President of Global Academic Initiatives at Arizona State University in November of 2019, where she facilitates ASU’s global academic portfolio. Prior to taking that position, she served as Deputy Provost and VP for Academic Affairs, and Foundation Professor of Law and Political Science at ASU from 2016 to 2019. She served as Dean and Arch Professor at UGA’s School of Public and International Affairs from 2013 to 2016, after serving as Interim Dean, Associate Dean for Outreach, and Associate Dean for Academic Affairs at the University of Texas School of Law. She also served as a visiting faculty member at the University of Southern California Gould School of Law in 2013. After graduating from Temple Law School, Lindquist clerked for the Honorable Anthony J. Scirica at the United States Court of Appeals for the Third Circuit in Philadelphia and later practiced law at Latham and Watkins in Washington, D.C. She also served as a research associate at the Federal Judicial Center in Washington D.C. assisting committees of the Federal Judicial Conference in addressing questions of judicial administration.

She earned her Temple J.D. in 1988 and in 1995 earned her Ph.D. in Political Science at the University of South Carolina. Dr. Lindquist resides in Scottsdale, AZ.