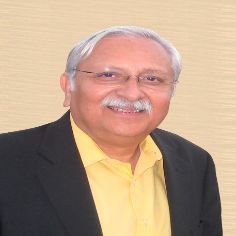 Dr Rajesh Tandon is an internationally acclaimed leader and practitioner of participatory research and development. He is Founder-President of Participatory Research in Asia (PRIA), global centre for participatory research & training since 1982. He is also Co-Chair of the UNESCO Chair on Community Based Research and Social Responsibility in Higher Education since 2012. The UNESCO Chair grows out of and supports UNESCO’s global lead to play ‘a key role in assisting countries to build knowledge societies.

Dr Tandon has served on numerous expert committees of Govt of India, UGC, UN, Commonwealth & World Bank. In 2015, the Indian Adult Education Association (IAEA) awarded Dr Tandon the Nehru Literacy Award. For his distinguished work on gender issues, the Government of India honoured him with the prestigious Award in Social Justice in March 2007. The University of Victoria, Canada, awarded Dr Tandon the degree of Doctor of Law (Honoris Causa) in June 2008. He is the first Indian to be inducted to the International Adult and Continuing Education (IACE) Hall of Fame (class of 2011). He is first Indian scholar to be inducted in Academy of Engagement Scholarship in 2019.