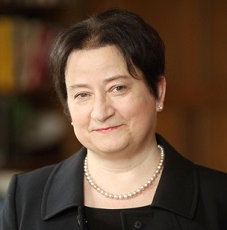 Lauren Robel is the Val Nolan Professor of Law at the Indiana University Maurer School of Law, where she writes and teaches in the areas of U.S. Constitutional Law and the law of the U.S. federal courts.  Robel served as the executive vice president and provost of Indiana University’s flagship campus in Bloomington from 2012-2021.  In that capacity, she led the academic and strategic planning and operations for a comprehensive high-research university campus of over 60,000 faculty, staff, and students.  IU Bloomington is a member of the Association of American Universities, and the university garnered $1 billion in external research funding during the past year.  During her tenure, Indiana University Bloomington created new schools in Media, Global and International Studies, Art, Architecture and Design, and Public Health, and significantly reorganized three others, adding over 250 new degrees; ranked in the top 6 among U.S. universities for study-abroad; created and executed an ambitious Bicentennial Strategic Plan; and completed a successful Bicentennial Capital Campaign that raised almost $4 billion for the university.  Robel has served as the President of the Association of American Law Schools and as the Chair of the Big Ten Academic Alliance.