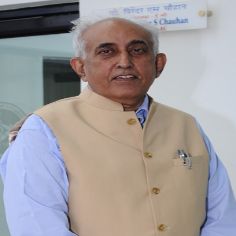 Dr. Virander Singh Chauhan is Currently Executive Chairman of National Assessment and Accreditation Council (NAAC) – an Autonomous Institution of University Grants Commission (UGC). Prof Chauhan is an Indian scientist and a Rhodes Scholar working in the fields of  Engineering and Biotechnology and known for his contributions to the development of a recombinant vaccine for malaria. He was honored by the Government of India in 2012 with the fourth highest Indian civilian award of Padma Shri. In 1974, he obtained a Ph.D., after which he moved to Oxford University, on temporary leave from the college, on a Rhodes scholarship where he stayed till 1977.

Prof Virander Chauhan is the secretary of the Indian arm of Rhodes Scholarships UK and is a member of the selection committees of such as Inlaks, Felix and Dr. Manmohan Singh scholarships. A former president of the Society of Biological Chemists during 2009-2011, Chauhan is an elected member (1992) of the Indian National Science Academy (INSA), Guha Research Conference and The World Academy of Sciences (TWAS). He has served as the president of Indian Peptide Society and as a member of scientific institutions such as New York Academy of Sciences, American Society of Microbiology, Indian Biophysical Society and Indian Immunology Society.