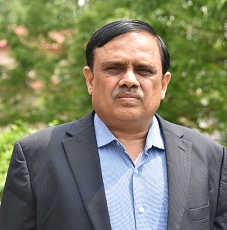 Prof. Dr. T. G. Sitharam has taken over as the Director, Indian Institute of Technology, Guwahati, Assam on July 01, 2019 and was holding additional position of Chairman, BOG of IITG till August 28, 2020. He has also taken over the charge of Director of CIT Kokrajhar in May 2021. He was a Senior Professor, Department of Civil Engineering, Indian Institute of Science, Bangalore, India (he is on deputation from IISc from July 01, 2019). He was formerly a Chair professor in the area of Energy and Mechanical Sciences at Indian Institute of Science (IISc), a premier research and education Institute in India. He was former founder Chairman of a Centre for Infrastructure, Sustainable Transport and Urban Planning (CiSTUP) at IISc, Bengaluru. Presently, he is the Honorary Professorial Fellow at University of Wollongong, Wollongong, Australia from 2019 to 2022 and Distinguished professor at Hankou University International Innovation Centre, China. Presently, He is the Chairman, Research Council, CSIR-Central Building Research Institute (CBRI), Roorkee. He is the Chairman, Executive Council of Visvesvaraya Industrial & Technological Museum Bangalore India. He is Governing Council member of National Council for Science Museums (NCSM), Govt of India and EC member of AICTE, Govt of India, New Delhi. He is the founder President of International Association for Coastal Reservoir Research (IACRR), registered in NSW, Australia. He has delivered talks on Sustainability of water resources management, underground drains and coastal reservoirs. He is the Chairman of the International Scientific Committee of the First IACRR Congress on Coastal Reservoirs and sustainable water management. He is the President, Indian Society for Earthquake Technology (ISET), Roorkee. He is presently the Chairman, AICTE South western zonal committee, Regional office at Bengaluru. Formerly, he was a visiting professor at Dalhousie University, Canada; Yamaguchi University, Japan; Indian School of Mines (IIT-ISM), Dhanbad; and William Mong fellow at University of Hongkong, Hongkong. He obtained his bachelor’s in civil engineering from Mysore University, India, master’s in civil engineering from Indian Institute of Science, India (1986) and Ph.D. in Civil Engineering from University of Waterloo, Waterloo, Ontario, Canada (1991). Further, he served as a Research Scientist (for his post-doctoral work) at centre for earth sciences and engineering in the Department of Petroleum Engineering, University of Texas at Austin, Texas, USA until 1994. During this time, he has lead research on sand production, wellbore stability and hydraulic fracturing in petroleum wells supported by many oil companies. Earlier to that, He served as a lecturer for six months in 1991 at University of Waterloo, Ontario, Canada and he taught Geotechnical engineering. Over the last 35 years, he has carried out research and development extensively in the area of geotechnical and infrastructure engineering, and has developed innovative technologies in the area of fracturing and geotechnical applications, leading to about 500 technical papers, 12 books with an H-index of 38 and I-10 index 101with >4375 citations. He has 5 patents, more than 120 consulting projects and 2 start-up companies to his credit. He is responsible for designing, restoration and expansion of several earth dams for raw water ponds, tailing ponds, ash ponds and red mud ponds across India. He has guided 30 Ph.D. students at IISc and 30 Masters Students and trained several postdoctoral and several thousand industry professionals and teachers through continuing education workshops. Presently he has another 9 Ph D students at IISc, Bangalore. He is the chief editor of international journal of Geotechnical Earthquake Engineering, (IJGEE), PA, USA. He is the Editor-inchief, Springer Transactions in Civil and Environmental Engg series, Book Series, Singapore. He is also fellow of many societies and actively engaged in socially relevant projects. He has received many awards and credits. In 2015, he is a recipient of IGS Kuckleman Award for his life time contributions in Geotechnical Engineering. In 2014, he is a recipient of Prof. Gopal Ranjan research award from IIT Roorkee for his excellent contributions to Geotechnical Engineering in the country. This was given to Prof. Sitharam for his pioneering work in Geotechnical engineering. Amulya and Vimala Reddy Lecture Award at Indian Institute of Science, Bangalore in the field of Sustainable Development for the year 2014 was conferred on Prof. Sitharam. Earlier, he is recipient of Sir C.V. Raman State Award for Young Scientists, Government of Karnataka, in the year 2002 in recognition and appreciation of exceptional contributions to Engineering Sciences. He was also the recipient of 1998 S.P. Research award (SAARC) from SP research foundation, USA for his contributions to geotechnical Engineering in SAARC countries. He has also received many best paper awards for his papers published in conferences and journals. He is the fellow of Institution of Civil engineers, UK and many other societies. He was listed in the world’s top 2% of scientists for the most-cited scientists in various disciplines by Stanford University in 2020.