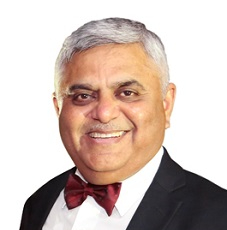 Dr. Sanjeev P. Sahni is the Advisor to the Vice Chancellor of O.P. Jindal Global (Institution of Eminence Deemed To Be University) (JGU) and the Member of the Governing Body of the university. As a founding member of the management team, he was instrumental in establishing the university in the year 2009 along with the Vice Chancellor. Dr. Sahni fosters collaboration across the university and manages changes in policies and practices that affect the academic and administrative life of the university as a whole. Dr. Sahni is the Principal Director of the Jindal Institute of Behavioural Sciences (JIBS). He also serves as a Professor in the university and as the Director of Centre for Victimology and Psychological Studies, Centre for Leadership and Change and Centre for Community Mental Health. Dr. Sahni is a distinguished scholar in the field of Psychology and his research interests span in the areas of Criminal Psychology, Cognitive and Neuropsychology, Competency Mapping, Organizational Development, and Leadership. He holds a Ph.D. degree in Organizational Behaviour. He possesses an extensive and rich experience of 32 years in Academia, Industry and Governmental Sector. His industrial expertise and extensive research allow for a more pragmatic approach in teaching, thus narrowing the industry-academia gap. Dr. Sahni has worked as a Research Scientist at several universities like University of Houston, Texas, USA, University of Illinois, Chicago, USA to name a few. He has served for 14 years as a Scientist in the Ministry of Human Resource Development (MHRD) and Sports Authority of India (SAI) where he spearheaded biofeedback training and other psychodynamic assessments to nurture and enhance the performance of sportspersons in India. He has to his credit mentoring of many ace sportspersons and infusing them with positivity and self-belief, which could take them to achieve the highest echelons in their disciplines. Dr. Sahni joined the Jindal Group in 2006 and served in various capacities such as the Head of Strategic HR and the Head of Corporate HR. He was responsible for revamping the HR practices across business verticals and inculcating a performance driven culture in the organization. During his tenure, Jindal Steel & Power Ltd. was ranked among the ‘Top 20 Best Companies to Work for in India’ rankings by Business Today and Mercer. He also served as the Head, Education of the corporation where he established and managed the educational initiatives of the group including Jindal Institute of Technology (which has now become O.P. Jindal University, Chhattisgarh), Jindal Institute of Power Technology, four Community Colleges of Technology and Skills, three Industrial Training Institutes, Medical College and ten senior secondary / secondary schools. Furthermore, Dr. Sahni has worked as the Co-Project Director of the Montgomery College India initiative, “Transforming Boundaries”, funded by the US State Department and USIEF. As a Professor at JGU, Dr. Sahni has been teaching courses such as Competency Mapping, Organizational Behaviour, Organizational Development, Business Communication and Etiquette, Leadership, Compensation & Benefits and Management Consulting Fundamentals to the students across all the eight schools. He has taught in various universities overseas as a Visiting Faculty member, namely, China University of Political Science and Law, Beijing, and Nanjing University, Nanjing in China amongst others. Dr. Sahni is also a certified Edward de Bono Six Thinking Hats Trainer. He has trained over 32000 school principals and teachers, senior Government officials, industry professionals, besides many more in over 50 countries on topics such as competency mapping, business communication, decision making at workplace, stress management, performance enhancement, emotional intelligence, best teaching practices, inspiring leadership etc. He has published more than 35 research articles in International and National indexed Journals, and about 20 book chapters. With 14 Books to his credit, some of the recent ones are; The Death Penalty (Springer Nature) Internet Infidelity: An Interdisciplinary Insight in a Global Context (Springer Nature), Piracy in the Digital Era (Springer Nature), Maximizing Human Potential Through Behavioural Competencies: 100 Core Competencies (Bloomsbury), Strategic Compensation Management & Design (Bloomsbury), and Conflict: The Police and The People (Lexis Nexis). Dr. Sahni is one of the few Indian psychologists to have dispensed his immense knowledge towards the development of society and nation with his remarkable vision. Through his astute leadership, Dr. Sahni has been able to touch the lives of so many people in education sector across the country and even abroad. He has certainly facilitated in changing the mindset of educators and in the same breath the mindset of the students. He has several awards to his credit, and has recently been nominated as a Member of the Board of Directors of the International Society of Criminology. He is the recipient of some very prestigious fellowships such as the ones by Indian Association of Sports Medicine, Sports Psychology Association of India and Indian Council of Medical Research. Dr. Sahni was conferred the Director Generalship of International Forum on Crimes and Criminal Law in the Global Era in Beijing, China in 2015 and awarded the Medal of Honor by the Serbian Academy of Sciences and Arts, the most prominent academic institution in Serbia. He has also served as Secretary to the Indian Association of Sports Medicine and the Sports Psychology Association of India.