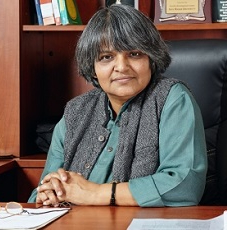 Prof. Dr. Rupamanjari Ghosh joined the University in July 2012, as the Founding Director of the School of Natural Sciences (SoNS) and the Dean of Research and Graduate Studies. She also headed the first Faculty Development Center started in 2013. She took over the role of the University’s Vice-Chancellor on 1 February 2016, and has since been at the helm of the University’s growth with her transformational leadership. Prior to joining the University, Dr. Ghosh served as the Dean of School of Physical Sciences at Jawaharlal Nehru University, Delhi, along with many other important academic and administrative positions. She has held several visiting faculty/scientist positions on invitation abroad and delivered numerous invited research seminars. Recipient of the Stree Shakti Science Samman for her ‘original contribution to Science’, she serves as an expert on the Department of Science and Technology (DST), Government of India committees in Physical Sciences; and in many central and state universities and institutes. She received the DAE (Department of Atomic Energy, Government of India) C V Raman Lecture award (in Physics) in 2018-19. She Co-Chairs the Federation of Indian Chambers of Commerce and Industry (FICCI) Higher Education Committee. She is currently a member of the Council of the Inter-University Centre for Astronomy and Astrophysics (IUCAA), Pune, and an External Member of the Research Council of CSIR-CSIO. Dr. Ghosh has a Master’s of Science degree in Physics from the University of Calcutta, India, and Ph.D. from the University of Rochester, New York, USA, where she worked as a Rush Rhees Fellow, selected for ‘outstanding scholarly ability and the promise of exceptional contributions to scholarship and teaching.’ Her pioneering work with Prof. L. Mandel on two-photon interference (using the nonlinear optical process of spontaneous parametric down-conversion) has yielded new direction in quantum optics and quantum information in the creation and use of a source of entangled photon pairs, and of single photons, is at the forefront of research today. Having contributed to science research and training from the university to the school level, she has also served as the Chief Advisor for the National Council of Educational Research and Training (NCERT) Science textbooks for Classes IX and X, developed afresh under the National Curriculum Framework – 2005.  A researcher, teacher, orator, and an academic administrator par excellence, Dr. Ghosh is well known for her stand and efforts to support the cause of gender justice and environment consciousness in the higher education system.