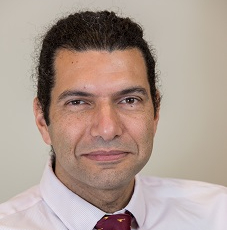 Professor Re’em Sari is the Vice President for Research and Development. Professor Sari is a professor of Astrophysics, and has served as head of the Center of Astrophysics and Planetary Science in the Faculty of Science.

Professor Sari received two Bachelor degrees from Ben Gurion University, the first in Physics and the second in Mathematics. In 1994, He earned his Master’s degree in Physics from the Hebrew University, and went on to complete his Doctorate in Astrophysics, also at the Hebrew University. He then joined the Institute for Theoretical Physics at Caltech in California, where he held a position as Associate Professor of Astrophysics and Planetary Science. In 2007, Sari joined the Hebrew University as a full Professor in Astrophysics. The following year he was appointed head of the Amirim program, an honors program for outstanding students, a position he held for six years. Simultaneously, Sari served as Chair of the Board of the Bloomfield Science Museum in Jerusalem. In 2017, Sari was appointed head of the Center of Astrophysics and Planetary Science. He became the Vice-President for Research and Development in 2018.

Professor Sari’s research spans a variety of sub fields in Astrophysics, including the investigation of the mystery of gamma ray bursts and other cosmic explosions, the development of models for the creation and evolution of planets in our solar system as well as other solar systems and the study of the dynamics of stars surrounding black holes in the center of galaxies.

Professor Sari is the recipient of numerous awards and honors, including the Helen B. Warner Prize for Astronomy of the American Astronomical Society (2006), the François Frenkiel Award for Fluid Mechanics from the American Physical Society (2007), The Rector’s Prize of the Hebrew University in Jerusalem (2009), a Guggenheim Fellowship (2010), two Radcliff Fellowships from Harvard University (2011 and 2016), The Michael Bruno Memorial Award from Yad Hanadiv (2011), and others. He has been awarded several significant research grants, including the prestigious European Research Council Starting Grant.