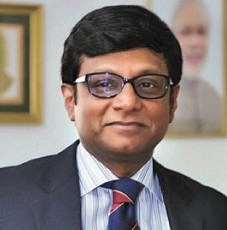 Exploring the World within: University Internationalisation at Home

Ambassador Prof. (Dr.) Mohan Kumar has an outstanding career in the Indian Foreign Service lasting 36 years which culminated in his being India’s Ambassador to France based in Paris. Under his watch, the Indo-French strategic partnership was strengthened and consolidated further in spheres such as defense, space, nuclear & solar energy, smart cities and investment. Earlier, Mohan Kumar was India’s Ambassador to the Kingdom of Bahrain where he witnessed and dealt with a strategically complex region characterized by events such as the “Arab Spring”. Ambassador Dr. Mohan Kumar has enormous expertise in the area of international trade- he was India’s lead negotiator first at the GATT (General Agreement on Tariffs and Trade) and then at the WTO (World Trade Organization) in crucial areas such as Intellectual Property Rights, Services, Dispute Settlement, Rules and Technical Barriers to Trade. He was a leading member of India’s delegation at the WTO Ministerial Conferences held in Marrakesh (1994), Seattle (1999) and Doha (2001). Ambassador Dr. Mohan Kumar also has strategic understanding of India’s ties with some of her key neighbours such as Bangladesh, Sri Lanka, Myanmar and Maldives. He oversaw India’s ties with these countries as Joint Secretary and Head of the Division at the Ministry of External Affairs. Ambassador Dr. Mohan Kumar specialization thus includes: diplomatic practice & foreign policy, strategic partnerships with India’s neighbours,  multilateral negotiations especially trade negotiations, climate change and globalization. Ambassador Dr. Mohan Kumar holds a Master’s In Business Administration (MBA) from the Faculty of Management Studies, University of Delhi and a Doctorate (Ph.D) from Sciences Po University, Paris. Ambassador Dr. Mohan Kumar also serves as the Chairman of Research and Information System for Developing Countries (RIS) since June 2018. Ambassador Kumar is author of a book entitled “Negotiation Dynamics of the WTO: An Insider’s Account”, published by Palgrave Macmillan (2018).