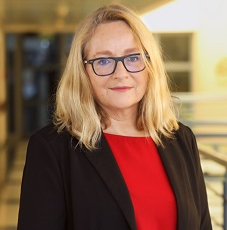 Professor Milette Shamir is the Vice President for Academic International Affairs at Tel Aviv University and a researcher in the field of American Studies at the Faculty of the Humanities.

Shamir joined Tel Aviv University in 1998 after earning her PhD from Brandeis University. Her research on 19th-century literary and cultural history has been published by Columbia University Press, Penn University Press, and other leading venues. She has been invited as visiting researcher to several universities including Duke University, The University of Texas in Austin, and New York University.

Shamir is currently the editor-in-chief of the journal Poetics Today. From 2015 to 2019 she served as Vice Dean of the Humanities for Academic Affairs. She co-founded TAU’s American Studies program in 2006, and served as its head for thirteen years. She served as chair of the Department of English and American Studies from 2006 to 2009. In 2012 she founded TAU’s pioneering undergraduate program for international students—the BA in Liberal Arts—and served as its academic director until 2016.