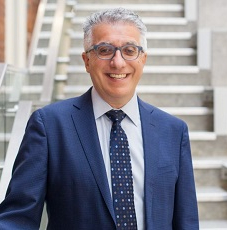 Michael Benarroch became President of the University of Manitoba on July 1, 2020. Dr. Benarroch is a Manitoban and former Dean of the I.H. Asper School of Business (2011-2017). He returns to Winnipeg where he maintains strong community-wide connections and a lifelong dedication to transformative higher education. His career includes serving as Provost and Vice-President (Academic) at Ryerson University (2017-2020), acting as the institution’s chief academic and operating officer as well as a tenured professor in the department of Economics, Faculty of Arts. He co-chaired Ryerson’s Truth and Reconciliation Implementation Committee and is an active advocate for the advancement of Indigenous engagement and reconciliation. As Dean of the I.H. Asper School of Business, Dr. Benarroch oversaw a five-year plan designed to put the Asper School at the heart of the province’s business and start-up community. Its focus was to advance the quality of research and create an exceptional student experience. During his tenure, the Asper School incorporated experiential learning opportunities across all programs, grew international opportunities for students and faculty, improved access for Indigenous students and enhanced its world-class graduate programs. During his 21-year-career with the University of Winnipeg, he was chair of the department of Economics (1999-2007) and acting chair of the department of Business and Administration (2007). After leading the creation of the University’s Faculty of Business and Economics, he became its founding Dean (2008-2011). He was awarded the Robin H. Farquhar Award of Excellence in Contributing to University Governance. Dr. Benarroch holds a BA (Honours) in Economics from the University of Winnipeg, a master’s in Economics from Western University and a PhD in Economics from Carleton University. A passionate teacher and researcher, he has taught economics at Canadian universities since 1989. He has a special interest in global economic outlook, the impact of trade on the environment and government economic policy. Dr. Benarroch has engaged with the boards of all three universities at which he has worked and has been an active leader in collegial governance. He has extensive experience working in unionized universities and has served both as a member of faculty association and the management bargaining teams. His extensive community service and board experience includes the Premier of Manitoba’s Economic Advisory Council, the Certified Management Accountants of Canada, and the Council of Economic Advisors for the Credit Union Central. He held a two-year term as chair of Manitoba’s Crown Corporation Council and was chair of the Board of Jewish Education. Dr. Benarroch was presented the Shem Tov Award for service to the community by the Jewish Foundation of Winnipeg (2009) and the Honorary Certified General Accountant Award for volunteer service as public representative (non-accountant) from the CGA Manitoba Board of Governors (2010).