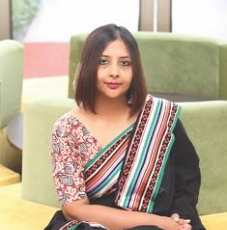 Dipika Jain is currently a Professor of Law, Vice Dean (Research), Vice Dean (Clinical Legal Education) and the Director of the Centre for Justice, Law and Society (CJLS) at Jindal Global Law School (JGLS), India. She is a visiting faculty at Transnational Law Institute at Kings College London since 2017.  She pursued her B.A. in Political Science (Hons) from Lady Shri Ram College and LL.B from Faculty of Law, Delhi University. She received the Canadian Institute of Health Research Fellowship Award in Health Law & Policy, 2006 to pursue a Master’s Degree at Dalhousie University, Canada. She earned her LL.M from Harvard Law School. Her teaching and research is at the intersection of Law and Marginalization. She writes on Gender and Sexuality, Postcolonial Feminism, Public Health Law, Transgender Law, Minor Jurisprudence, Critical Legal Theory, Constitution and Social Movements, Reproductive Justice, Legal Education and Critical Pedagogies and Empirical Legal Studies. At JGLS, she is the recipient of several teaching excellence and research excellence awards since 2009. Her research was recently cited by the Supreme Court in the landmark decision of Navtej Johar v. Union of India (2018). In 2018, she was designated as the first Research Associate Professor at JGLS. In 2020, her research was cited in the legislative debate on abortion laws in the Parliament. Her recent work appears in the Journal of Human Rights, Violence and Gender, Sexual and Reproductive Health Matters, Columbia Journal of Law and Gender,  Statute Law Review (Oxford), Harvard Journal of Law and Gender; Berkeley Journal of Gender, Law and Justice; American University Journal of Gender, Social Policy and the Law; Houston Journal of International Law and prestigious Indian journals including Seminar and Economics Political Weekly, among many other journals. She is co-editor of Desire and its Discontents: Queer Politics in Neoliberal India (forthcoming, Zubaan and Chicago University Press). As the Director of CJLS, she has addressed  various barriers in access to justice for marginalized persons. CJLS had crafted policy interventions and advocacy with parliamentarians, legislative and judicial interventions; facilitated consultations with social movements, grassroots movements and civil society; organized workshops on critical pedagogies, and conducted legal empowerment workshops and courses for activists, professionals and students. She has collaborated with  transgender  and gender variant activists to facilitate national consultations; organized the first-of-its-kind residential certificate course on the rights of transgender, intersex and gender-diverse persons, and conducted exciting symposiums and conferences in collaboration with organizations and institutions such as the Center for Reproductive Rights, ARC International, Cornell Law School and the University of Connecticut among others. She has advised the Law Commission of India on various reports on Shared Custody, Animal Welfare Law and Maintenance Laws. She has also served as an International consultant with the UNDP on Sharia Law in; Centre for Reproductive Rights (New York);  IPAS Development on Reproductive Justice and UNDP India on Digital Health. As a founding faculty at Jindal Global Law School, Prof. Jain has played an instrumental role in setting up the Law School, which includes serving as  the Head of its  Students Affairs, Academic Affairs Office and Recruitment Chair. She is currently the Chairperson of the Academic Review Board and member of the JGU Research and Ethics Board. Before joining the academia, she was lawyer with Human Rights Law Network. She conceptualized  developed, managed and coordinated the national programs on legal aid for People Living with HIV/AIDS while specifically leading a large team of lawyers and social workers across more than 10 HRLN offices across India. During this time, she worked on precedent setting public interest litigations in the Supreme Court of India including Sampurna Bahrua vs. Union of India (petitioning for the implementation of the Juvenile Justice Act, 2000 in fifteen States in the country. The Act was amended as a result of this petition.) the Right to Food and Access to Antiretroviral Drugs Case.