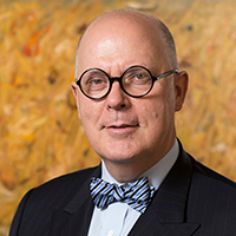 The fifth Vice-Chancellor and President of Macquarie University, Professor S Bruce Dowton  is a paediatrician, clinical geneticist, molecular biologist, researcher and academic, who has served as a senior medical executive at a range of universities, healthcare institutions and consulting organisations. He also served as a paediatrician at the Massachusetts General Hospital for Children, and as Clinical Professor of Paediatrics at Harvard Medical School. Professor Dowton joined the University in September 2012. During his first year he led a highly consultative process to develop a long-term strategic framework for the University, establishing an ethos of service and engagement at the heart of its learning, teaching and research activities. Dowton’s ability to clarify complexity, and highly engaging personal style, have since become hallmarks of his Vice-Chancellorship. He has published articles on a wide range of topics in peer-reviewed academic publications, and has held Visiting Professorial and External Examiner appointments at several universities including the University of Edinburgh, Columbia University in New York, the University of Tromsø in Norway, Hong Kong University, as well as institutions in the People’s Republic of China.