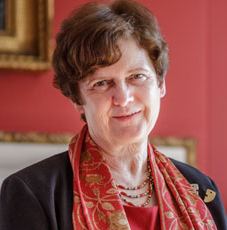 An alumna of Somerville , she holds both her BA and DPhil in Modern History from the University of Oxford. Her career has spanned museums, archives and libraries, working both in national organisations (the UK National Archives and the British Library) as well as universities on both sides of the Atlantic (University of London, Yale and now Oxford). Dr Prochaska is a Fellow and one-time Vice President of the Royal Historical Society. She has managed large staffs of scholars, librarians and archivists, and has chaired national and international boards and committees dealing with archives and scholarly resources. She is currently chair of the Sir Winston Churchill Archive Trust and the Institute of Historical Research Trust, a commissioner of the Marshall Aid Commemoration Commission, member of the General Federation of Trade Unions Education Trust, and an adviser to the OP Jindal Global University and other organisations in India. During her tenure as Principal of Somerville, she was instrumental in establishing the Oxford India Centre for Sustainable Development and the Margaret Thatcher Scholarship Trust, and in securing additions to student accommodation in the College. Her current scholarly interest focuses on the history of cultural restitution, and the relationship between national heritage and national identity, with a special interest in the period of the Second World War.